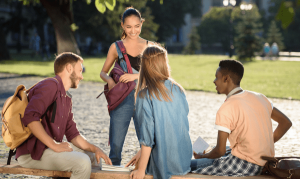 Brief Alcohol Screening and Intervention of College Students (BASICS): A Harm Reduction Approach, is a preventive intervention for college students 18 to 24 years old. It targets students who drink alcohol heavily and have experienced or are at risk for alcohol-related problems such as poor class attendance, missed assignments, accidents, sexual assault, and violence. BASICS is designed to help students make better alcohol-use decisions based on a clear understanding of the genuine risks associated with problem drinking. The program is conducted over the course of two brief interviews that prompt students to change their drinking patterns. The first interview focuses on introducing the student to the program, assessing the student’s level of risk of alcohol-related problems, and obtaining the commitment to monitor drinking in the interval between the two sessions. The second interview is a feedback interview in which the student is given a personalized feedback sheet containing information on the frequency of drinking, quantity of alcohol consumed, estimates of typical and highest-reported blood-alcohol content, and comparisons with student drinking norms. In addition, the student is provided with information about risks associated with drinking and myths about alcohol use, and receives advice on how to drink safely. The program’s style is empathetic, not confrontational or judgmental, and aims to (1) reduce alcohol consumption and its adverse consequences, (2) promote healthier choices among young adults, and (3) provide important information and coping skills for risk reduction.

The initial study done at the University of Washington (Marlatt et al. 1998; Baer et al. 2001) screened high school students intending to attend the university and selected 348 students-to-be who were predicted to be at high risk for drinking problems in college. After random assignment, the treatment group but not the control group underwent the brief intervention during the freshman year. Assessments at baseline, 6 months, 2 years, and 4 years measured both drinking rates and harmful consequences. A separate group of normal students not at high risk was followed for comparison. Over a 2-year follow-up period, all sampled high-risk college drinkers drank less and reported fewer alcohol-related problems. However, participants who received the BASICS intervention demonstrated a significantly greater deceleration of drinking rates, harmful consequences of drinking, and alcohol dependence than participants in the control group. A 4-year follow-up found significantly greater reductions in alcohol use and negative consequences of drinking for the treatment than control group. Although the frequency of drinking remained stable for both groups, the treatment group showed fewer dependence symptoms.

Borsari and Carey (2000) conducted another randomized trial of 60 college binge drinkers selected from an introductory Psychology class and followed for 6 weeks. Results showed that by the 6-week follow-up, the treatment group drank significantly less than the control group on three indices (number of drinks consumed per week, number of times consuming alcohol in the past month, and frequency of binge drinking in the past month).

In a different sample of 1,275 athletes enrolled in a public northeastern and northwestern university, Turrisi et al. (2009) randomly assigned study participants to BASICS, Parent Based Intervention (PBI), BASICS+PBI, or control with assessments conducted at baseline (prior to matriculation) and 10 month after baseline. Posttest findings demonstrated that BASICS significantly lowered the levels of peak blood alcohol concentration as well as the numbers of drinks consumed on a typical weekend during the first year of college.

Borsari, B., & Carey, K. B. (2000). Effects of a brief motivational intervention with college student drinkers. Journal of Consulting and Clinical Psychology, 68, 728-733.

If you are interested in staying connected with the work conducted by Blueprints, please share your email to receive quarterly updates.

Blueprints for Healthy Youth Development is
currently funded by Arnold Ventures (formerly the Laura and John Arnold Foundation) and historically has received funding from the Annie E. Casey Foundation and the Office of Juvenile Justice and Delinquency Prevention.